When I was about ten years old, a big storm moved over my grandparents’ house in Crawford, Texas. The sky turned brown, the colors on the whole street shifted eerily, and my ears popped as titanic air masses jostled overhead. I knew from school and from the weatherguy on TV that deep brown was the mark of a tornado sky.

I saw a similar color in Sydney on my first antipodean Christmas Day. But on the arid continent, brown means a bushfire sky, caused by the ash and smoke of the summer burn-offs.

The same hues appeared today over New York City as this thunderstorm rolled in: 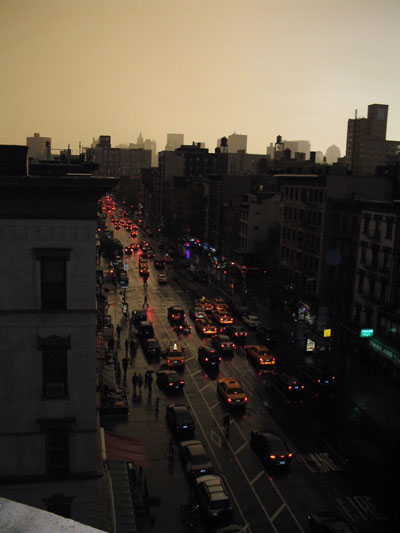 This is from Justine’s and my apartment, looking down on Second Avenue from the seventh floor. The camera is facing south, and it’s about six PM.

My favorite moment in a NYC storm is when the streets turn dark, but the sky is still glowing. Especially when the heavens are the crazy brown they were today, shifting the colors of everything and turning the rain-mirrored asphalt the hue of a slow-moving bayou.

It was definitely weird looking. Right as the rain broke, we were headed off to meet our Razorbill editors for dinner, umbrellas in hand. A kid came out of the building in front of us, looked up at the sky, turned to his dad and said, “Why’s that like that?”

I didn’t tell him about the tornado-sky thing. Partly because I would have been lying. Back when I was ten, the tornados didn’t come. One hits Crawford every few decades, but I’ve never seen it happen. And in NYC, of course, storm funnels hardly ever form. But although I’m generally against massive death and destruction and all that, one of these days, you know, it would be really cool to see one live . . .