According to Sci Fi Wire, the chances of a Midnighters TV show have gone up a notch or two. Because of the success of Supernatural last Fall, they’ve ordered a pilot script for Midnighters. See here: 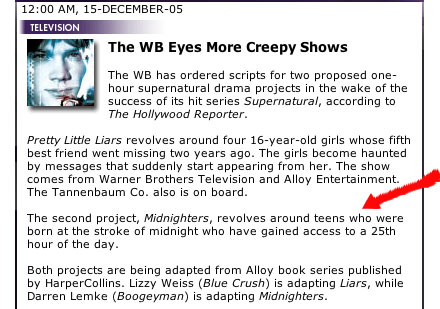 Now all this means is that a writer (a guy called Darren Lemke) has been paid to write a script. If the WB like his work and see a future in the series, it is possible there’ll be a Midnighters TV pilot in Fall of 2006. (Or 2007?)

This would be a gas. I’ve always thought that Midnighters was the most TV-friendly of my series. I just hope they do a good job . . .

By the way, I got this link from Jonathan’s fan site, midnighters.org. Midnighters fan sites seem to be proliferating, as witnessed by Morgan’s site, from which the excellent comics of my last post came.

Anyway, watch this space, and Jonathan’s and Morgan’s sites, for news about this possible series.

But when it comes to Hollywood, never, ever hold your breath.

93 thoughts on “Midnighters on TV”