First off, the signings went well, and were blogged by Alia-Cat and Claire. Unfortunately, Justine was a bit sick, but she soldiered bravely on. (And is much better now, thank you.)

When we got back to NYC, what should be waiting in my electronic mailbox but more of Brianne K’s excellent Midnighters comics, which you may remember from this post. How happy-making! 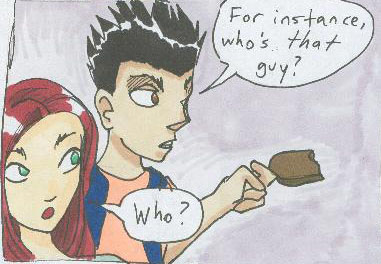 These comics are based on Blue Noon, but they don’t give any of the plot away. Click here for the big version.

Brianne’s comics have a cool way of reflecting the books without lifting any actual scenes or dialog. It’s sort of like she’s drawing the stuff that happens between the chapters, during all those times when the Story isn’t in motion. As a writer, that’s a pretty cool thing to see. It’s sort of like my characters are really alive, and doing stuff without me.

Which is, I guess, what having readers is all about: making the world real enough to exist in someone else’s brain.