Hey, sorry I’ve been so lame posting this summer.* But I haven’t been totally lazy. I’ve been writing!

What, you may ask? Well, it’s a secret, and I can’t tell you any details about it yet.**

But here’s a funny thing that happened . . .

Quick note: This would be a good time for anyone who works for my publishers to stop reading. No really. Nothing to see, move it a long, because this is SO unrelated to delivery dates or professional issues of any kind. Okay?

So, all you non-publishing types, there I was, 16,000 words (65 pages) into my shiny wonderful new book. Except it wasn’t wonderful; something was deeply, deeply wrong. The voice, the plot, the structure all seemed to be sucking! No matter how much I edited the writing, smoothed the transitions, caffeinated the plot, or voicified the characters, it all just came out flat.

The whole book gave me that icky feeling of inexcusable lameness, like when they rap on Sesame Street, or when my parents would say “The Led Zeppelin” and “Clash,” instead of the other way around. Or when politicians clap along with the musical act before their speeches. Wrong. Wrong. Wrong.

My novel was to a good book what this object is to a florescent light: 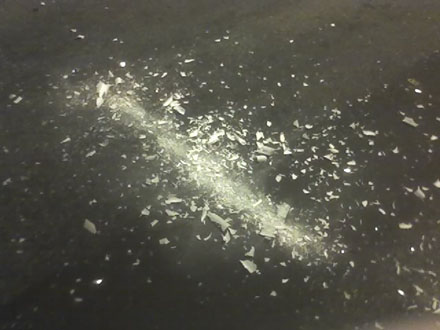 This was taken by me on a NYC street. Is not that the awesomest? What the heck stepped on that light bulb? Godzilla? Truckzilla?

Anyway, back to my tale of quasi-woe. The weird thing was, I was pretty sure that somewhere, maybe just next door to what I was writing about, something pretty cool was happening. The world of the novel was fascinating, but the novel wasn’t.

So let’s skip past many sleepless nights and screaming writing sessions to a day shortly before Christmas. Justine and I were walking to breakfast, and I finally realized the problem . . . I had the wrong point of view.

The main character, the one whose POV I was writing from, was too smug, too knowing, and generally non-likeable. A certain other person in the story was saying and doing much more interesting things. And worse, most of those cool things were being said and done when my POV person wasn’t around, which meant that the reader was only getting told about them.

Now, I’d like to say this was easy. Like I’m a fearless and industrious perfectionist, who cares only about the final product. But no . . . it came in slow, reluctant stages.

First I said, “Well, we can keep most of this stuff, just change some pronouns and whatnot, and it’ll all seemlessly become Character B’s POV. Just start the story earlier!”

That, of course, failed to work. After all that smoothing and editing, lame Character A had saturated the prose. So I told myself, “Well, maybe we can have two points of view, and I can keep maybe four or five thousand words.”

And that worked even less. Character A dropped back into the story like a led zeppelin, possibly even the led zeppelin.

So after much toing and froing (mostly froing), only a tiny fraction of those lost 16,000 words have been rescued. And all have come at an editing cost roughly equal to writing them from scratch in the first place. Possibly more.

But I promise, the novel is much, much better, and I am a happier writer-person. More importantly, these next months of effort will be far more enjoyable, and the next forty years of having this book on my shelf much less embarrassing. Also, I got to keep 100% of the thinking I’ve already done, free of charge!

And all at the small cost of one month’s work.***

So my words of wisdom for today are:

“Sometimes tossing out vast quantities of words is better than letting a whole book bleed slowly to death. Don’t give up, just start over.”

Okay, maybe that’s not the feel-good story of the year. But these are:

1. The Last Days and Justine’s Magic Lessons have both been nominated for the Aurealis Awards! Yay to us and the other nominees:

2. After twenty-two months in print, Uglies has joined Pretties and Specials on the NY Times bestseller list. It’s wild for such an old book to appear for the first time on a bestseller list, and it can only mean that you guys are still talking it up to your friends. Yay to you.

3. Last July I blogged about some haiku I wrote for an issue of Subterranean Magazine. This issue can now be downloaded for free. Big yay to those publishers who realize that freely downloadable materials lead to more sales, not fewer.

*Southern hemisphere summer = December to February.
**Don’t even bother asking.
***Okay, maybe two months, if you include Thailand. But seriously, non-publishing dudes, I was chilling in Thailand.

63 thoughts on “Tale of Quasi-Woe”