And it’s only Wednesday.

Actually the good stuff started on the weekend, when Justine and I went to the Humble Teen Lit Fest, as mentioned in my last post. It was awesome. We had about 1,000 attendees, the organization was smooth as silk, and all the guests were a blast.

After Chris Crutcher’s moving keynote address, I took over the gym for my two sessions—though, alas, I was not allowed to take control of the scoreboard. I got to talk to about 500 kids altogether, including one girl wearing painful-looking Peeps contact lenses. Thanks to everyone who asked questions. Without you question-askers I am a very boring man.

Then came two solid hours of signing, one of the more fun hand-cramps I’ve ever experienced. Everyone was just so enthusiastic. After that, Justine and I went out with a passle of librarians and my uncle (a principal in the district) for Mexican food. It was a splendid day. Many thanks to everyone who made it happen.

And the week has stayed wonderful. Today my pals at Simon & Schuster messengered over this little artifact: 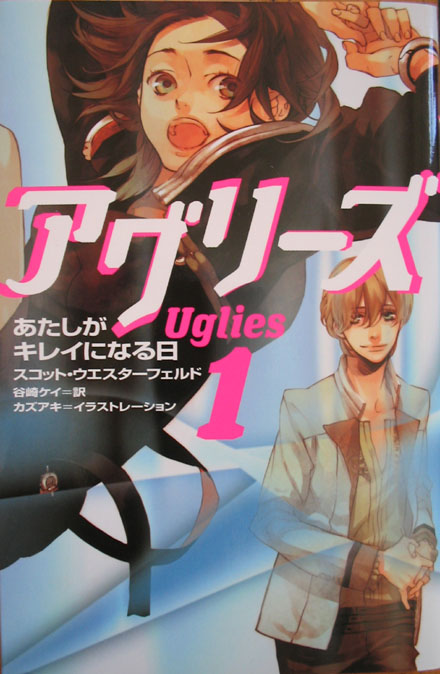 Yes, that’s the Japanese cover for Uglies. And it’s so. Very. Cool.

But the coolness doesn’t stop on the outside. Observe the inside flap:

That’s the traditional meet-the-characters spread. Luckily, I have a micro-smattering of Japanese from college days. Rightmost is, of course, Tally. On the left-hand page are:

If you want to decode the katakana yourself, use this table to work out the names are pronounced in Japanese. I must admit that the romanization of “David” is freaking me out.

UPDATE: From the way this post was written, it must have looked like this is a manga version of Uglies. But it’s just a novel with a few illustrations. Like these:

Here’s the party scene, with Peris in his tux and Tally clutching a pig mask and looking crumpled.

And here’s the all-important hoverboard shot!

This is just so cool, I can die now. (Well, maybe after a manga version gets created and translated.)

Thanks to Angharad Kowal at S&S foreign rights for selling it, Sony Magazines for buying it, Ken Tanizaki for translating it, and KAZUAKI for adding the visuals.

Update 2: Here’s a link to Amazon.jp, for those of you mad enough to buy a book you can’t read for four or five cool illustrations.

89 thoughts on “Best Week Ever”