Most of you may already know that a Twilight Zone episode from 1964 is an early example of the dystopia presented in Uglies. It’s called “Number 12 Looks Just Like Me,” and is based on a short story by Charles Beaumont called “The Beautiful People.” Some enterprising soul has posted the entire thing to YouTube. 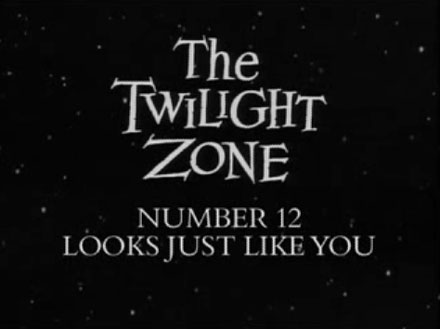 The poster has set the video to not embed, but click below to watch the three parts:
Part 1
Part 2
Part 3

Until last night, I hadn’t seen this gem since I was a little kid, so I’d forgotten all the details. Especially the phrase “pure perfection of pigmentation” (appearing 15 seconds into part 2), which is particularly creepy given how white everyone in the episode is. (Despite what the US covers for Uglies suggest, in Tally’s world everyone is racially averaged, or at least pushed toward the middle of the bell curve.) Note also the disturbing moment when the protag’s mother says to her braindeadmaid, “I don’t understand why you people have so much trouble with first names.” Hmm.

I’d also forgotten that in “Number 12” people look so much alike that they need name tags (obviously not the case in Tally’s world—my future is bell curvy, not cookie cutter). Here the facial choices are so limited that all fourteen characters are played by four actors. And what is it about the extreme minimalism of sf sets? Get some frickin’ posters for your walls, future people!

And some, um, better clothes.

Of course, compulsory plastic surgery is a venerable theme in sf. Not surprising, given that the first elective nose job occurred about a century ago, about the same time as H.G. Wells was writing War of the Worlds. (Fun fact: the earliest known skin grafts were performed in India 2800 years ago!) Other early fictional examples of compulsory cosmetic/brain surgery include L.P. Hartley’s 1960 story Facial Justice, Kurt Vonnegut’s “Harrison Bergeron” (1961), and of course Ira Levin’s Stepford Wives (book: 1972; films: 1975, 2004).