We’re still here in northern California, getting ready for Justine’s last west-coast gig tonight at Not Your Mother’s Book Club. (Thursday, 7PM, Books Inc., Opera Plaza, 601 Van Ness, San Francisco, CA.) But luckily, Robin had so much fun guest-blogging yesterday that she has returned instantly and without delay. She loves you guys!

I guess I’ve made painfully clear my current position on writing. Having written (as in being finished, done, computer off, dancing shoes on): Rocks.

Currently writing (as in sitting in front of my computer bleary eyed and wondering why the magic idea monkey who’s supposed to live under my desk has been on vacation for the last several years, leaving me to make stuff up on my own which, as it turns out, is kind of hard work): Sucks.

But keep in mind I donâ€™t know how to do anything else. (And donâ€™t want to.) So I guess itâ€™s my own fault that Iâ€™m chained to this computer, and here, for those of you who are curious, is the story of how I got here. (For those of you who are 100% not curious, you can scroll down to the bottom for my take on the eternal vampire/werewolf question. I’m still working on the unicorn/zombie thing.)

This is the first book I ever wrote:

I was in fifth grade, and it was a truly horrible ET rip-off. It was also only 32 pages long with some really big spaces between the lines, so when I say you guys are ahead of me, with your piles of notebooks and epic novels hidden under the bed, I mean it.

Fast forward a few years, through high school writing classes . . . through college, when I decided Iâ€™d never be a Real Writer . . . through to my summer internship at Scholastic, the summer before senior year. And the second book I ever wrote:

Coincidentally, this book also had 32 pages. (With about ten words per page. And, um, some of the â€œwordsâ€ were actually pictures.) Still, itâ€™s a real book. With a cover and an entry on Amazon. Thus it was officially the most awesome thing Iâ€™d ever done in my life.

After college, I went to work at Scholastic, where I spent most of my time editing other peopleâ€™s books. (If you had a DragonBall Z coloring book when you were a kid, or were forced to read the rather tedious adventures of the Boxcar Children, you have me to thank.)

Turns out working in publishing is an excellent way to learn about books. Making them, reading them, and writing them. Itâ€™s also a good way to sucker your bosses into letting you write some of your own. Even if theyâ€™re a littleâ€¦embarrassing: 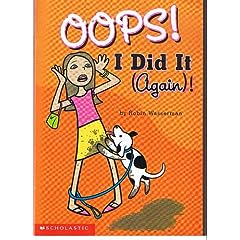 Yes, I wrote a ton of those collections of â€œembarrassing moments from kids just like you and me!â€ (Spoiler alert: Theyâ€™re almost all â€œfrom kids just like me, by which I mean, me.â€ I fall down a lot.) I wrote a lot of this stuff â€” movie novelizations, sleepover activity guides, glossy factoid books about one hit wonders who used to be on the radio and probably now work at Radio Shackâ€¦

Fast forward another couple years. In a grand gesture, I quit my job, packed all my stuff in the car, drove cross country, moved to LA, andâ€¦went to grad school. Except ignore the grad school thing, because itâ€™s not particularly glamorous and doesnâ€™t actually have anything to do with this story, except for the fact that I figured I was leaving New York and publishing behind forever.

But my grad school was unpleasant. Hideously unpleasant. So to entertain myself, I started coming up with book ideas. Not embarrassing moments collections or movie novelizations or ET rip-offs, but ideas of my own. For the first time in what felt like forever, I was writing for myself again. And for the first time pretty much ever I stopped writing what I thought other people would want to read and just wrote something I wanted. That turned out to be the beginning of the first book in the Seven Deadly Sins series.

I sent what I had to an editor at Simon & Schuster. (Disclaimer: Usually, itâ€™s a good idea to submit to an agent instead of submitting straight to a publishing company, but I lucked out â€” thanks to my old job, I knew someone who worked at S&S, and, being the extremely fabulous and generous person that she is, she agreed to take a look.) Then I waited. Waited more. Drove myself insane. Along with everyone I else I knew.

Yesterday someone asked me where I was when I got the Call, the life-changing-weâ€™re-going-to-publish-your-book-and-no-this-is-not-some-cruel-joke-Call. I was sitting in an insanely boring European history class, doodling pirate faces in my notebook and wondering why the 108 year old professor was actively trying to put us to sleep. I went outside at the break (this was winter in LA, so picture sunshine and shorts), checked my messages . . . and almost had a heart attack.
Ten minutes later I went back inside, looking like a grinning zombie and thinking, â€œIâ€™m a writer Iâ€™m a writer Iâ€™m a WRITERâ€¦â€

Eventually, I packed all the stuff back into the car, drove back across the country, moved to New York, and started doing this writer thing full time (hereâ€™s where the head-banging and the Advil come in), and here I am. For all my complaining â€” and clearly, I do a lot of it â€” itâ€™s exactly where I want to be.

Okay, vampire/werewolf: Sorry, wolf-lovers amongst you, but itâ€™s vamp all the way. This isnâ€™t an Edward/Jacob thing, itâ€™s a Spike/Oz thing. I wonâ€™t say Iâ€™m the biggest Buffy fan in the world â€” because I happen to know the biggest Buffy fan in the world, and sheâ€™d beat me to a pulp with her Angel action figure if she heard I was claiming her title. But suffice it to say, my heart belongs to Spike. Yes, the whole no-sunlight (and no soul) thing would be a drag, but so would locking your boyfriend in a cage for a few nights a month. Plus, maybe he (love of my life Spike) would let me borrow his leather jacket.

PS from Scott:
Spreadshirts, the home of Wearable Extras, has free shipping for the next two weeks. Just use these s3krit codes:
In the US: OKTOBERSHIPPING08
And in Canada: CADOKTOBERSHIPPING08