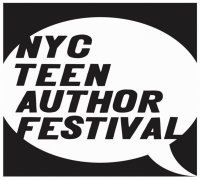 In exciting news for those of you in the New York City area, the first-ever NYC Teen Author Festival (March 16-22, 2009) has just announced its schedule. And this schedule is VAST! So vast, in fact, that I must pause before pasting it into this post to tell you what I’m doing.

(See the full schedule below for times and places.)

To kick off the festival on Monday, March 16, Justine and I have put together a Juvenilia Smackdown panel. It consists of us two, Holly Black, Cassandra Clare, Alaya Johnson, David Levithan, and Diana Peterfreund reading from our childhood and teenage writings. (Spoiler Alert: WE SUCKED.) The incomparable and immoderate Libba Bray will be moderating us.

I’m also participating in a tribute to Joe Monti on Wedneday, March 18, where I’ll be reading from Leviathan. First time in public for that book. Ever!

And I’ll be at the giant Books of Wonder mass signing on Sunday, March 22.

Plus, I’ll be hanging out all week at other Festival stuff. (So. Much. Stuff.)

Note that the Festival has a Facebook group, so join away!

Okay, so here’s the full schedule. (Note that everything is free!)

I Have Seen the Futureâ€¦and It Sounds Like This
Wednesday, 3/18, 6pm, Mulberry Street Branch of the NYPL, 10 Jersey Street (Between Lafayette & Mulberry Streets)

Teen authors are notoriously stingy about reading from their works-in-progress. But for Guest of Honor Joe Monti, authors Libba Bray, Rachel Cohn, Eireann Corrigan, Justine Larbalestier, Barry Lyga, and Scott Westerfeld are willing to share a little bit from their future books. Hosted by David Levithan.

Rock Out with TIGER BEAT!
Thursday, 3/19, 6pm at Books of Wonder

By day, Libba Bray, Daniel Ehrenhaft, Barney Miller, and Natalie Standiford are upstanding authors. But by night, they turn into â€¦ TIGER BEAT, the first ever YA author rock band. Tonight is their debut public performance â€¦ and itâ€™s sure to go down in legend.

With opening act The Infinite Playlists (Rachel Cohn and David Levithan reading a litany of musical references, but mercifully not singing).

Join authors Coe Booth, Paul Griffin, Maureen Johnson, David Levithan, Cecily von Ziegesar, and Rita Williams-Garcia in a spirited reading and discussion about teen novels set in New York City â€“ from the glamour of the gossip girls to the grit of the Bronx projects, from the everyday battles of the high school halls to the extraordinary events of 9/11.

This new list only has the best of the best, and includes books, music, movies, and video games. Featuring a keynote by Walter Dean Myers

Over a dozen authors salute teen readers and teen advisory board members from around the city, including Blake Nelson, reading from his upcoming novel Destroy All Cars.

Join over 40 authors for a signing extravaganza as they take over Books of Wonder, sign books, and converse with fans new and old. An incredible event that is sure to go down in book-signing history.