Geektastic: Stories from the Nerd Herd is in stores now! 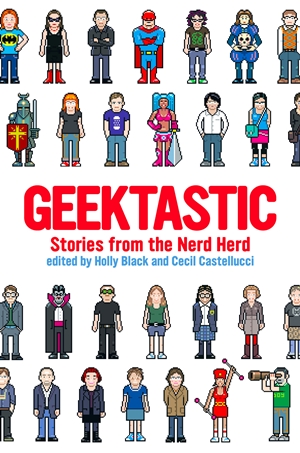 This is one case where the marketing copy pretty much tells the story:

With illustrated interstitials from comic book artists Hope Larson and Bryan Lee O’Malley, Geektastic covers all things geeky, from Klingons and Jedi Knights to fan fiction, theater geeks, and cosplayers. Whether you’re a former, current, or future geek, or if you just want to get in touch with your inner geek, Geektastic will help you get your geek on.

I’ve really loved the stories in Geektastic that I’ve read. A lot of them have the feel of being based on real events—strange encounters as science fiction conventions, amusing role playing incidents, and general mayhem both on- and offline. It gives a little glimpse into the dark underbelly of geekery.

Here’s an interesting article about the cover, in which it is revealed that those little geek icons are portraits of the contributors! Can you guess which one is me?

Actually, I’m just going to tell you. It’s this one:

As you can see, I’m wearing all black and the pair of brass goggles that I use when working on my airship!

Update:
Yes, everyone, it is in stores now. Sorry about the earlier mislead. Never trust Amazon about release dates!

54 thoughts on “Geektastic Is Out!”