I’m finally catching up on my FAF backlog. There were two weeks of tour-FAF with a Halloween FAF in between, a missed week due to the Shay’s Story cover (and laziness), and of course all those weeks I missed during tour. But at long last FAF is moving forward!

Here’s one image that was given to me on tour, but was forgotten because it was handed to me on an iPhone, then emailed. (It’s made of PIXELS.) It’s from Alli, is called “NOOOO!” and is a Tesla’s-eye-view of a certain climactic event in Goliath.

Yes, the end of a tesla-sparkle-cane looks like an ouchy place to be.

I like this one of Deryn by Hillary, called “Miss Sharp.” Clearly she’s in female clothing, but this must be a bit after the Great War ends, because it’s 1920s-looking. (I think.)

Really cool clothes, actually. I think Deryn will look excellent in the ’20s, which will also be her 20s. (Alek and Deryn were both born in 1899, after all.)

I LOVE this whale-o-plane combination of Leviathan and How to Train Your Dragon by Adventaim!

It just makes me smile.

I like the texture on this one. But man, hydrogen-sniffers are anxiety-making when you really look at them. That’s what I like about Keith—he’s not afraid to draw some disturbing stuff.

And for you Uglies fans whose ears just perked up, this just missed the Halloween cosplay edition. Specials! 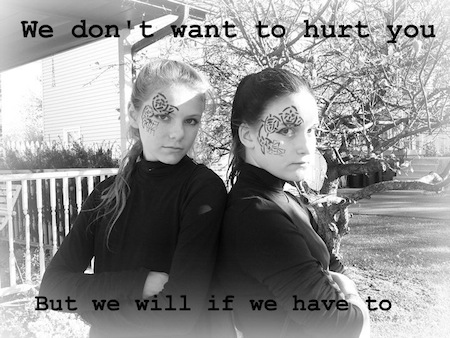 I must say, that line never gets old. I know someone who’s getting it tattooed on their arms, so we may be seeing it here on FAF soon.

Okay, that’s only five FAs, but Friday in the US is drawing to a close, it’s done here in Sydney, and I need to make lunch!

See you early next week for a special poll. (You will enjoy it.)