The second book of the Zeroes trilogy, Swarm, is almost out! 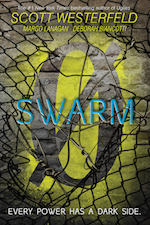 As per my autumn tradition, I will be on tour, hitting the San Francisco/Bay Area (Menlo Park, Santa Rosa, and SF) the Phoenix/Tempe area, Chicago, Princeton NJ, and New York City.

I’ll also be at New York Comic Con in early October. See the end of this post for details.

Here are the dates. Hope to see you somewhere!

Note: the time for the Wednesday event at Book Passage was incorrectly listed previously as 7 PM. It takes place at 6 PM.

Wednesday, October 5
6PM
BOOKS OF WONDER
18 W. 18th Street
New York, NY  10011
This appearance will be with Krystal Sutherland, a fellow Australian and author of Our Chemical Hearts. I’m really excited for you to meet her!

Friday, October 7
12:30PM
Let’s Get Lost Panel
Hudson Mercantile Bldg.
500 W 36th St
New York, NY 10018
It’s been said that a good book can take you places…and no one knows that quite as well as readers of fantasy and science fiction. In this panel, travel to new (and occasionally familiar) worlds with MG & YA fantasy and sci-fi authors as they discuss the challenges of crafting an entire world out of thin air. Featuring me, Delia Sherman, Danielle Paige, James Dasher, Cristina Arreola, Jeff Giles.
You need a Bookcon ticket to attend this event.

After-Panel Signing
1:45 – 2:45pm
Location: same as above.
Notes: wristbanded, 150-person maximum signing. I’ll be giving away and signing posters as well as any books you bring!

In November, I’ll be at YALLfest in Charleston, SC!
November 11-12
Specific schedule TBD.

That’s it for now. If I’m missing your city, town, or local iceberg, I apologize. I love you all, but you outnumber me.

One thought on “Swarm Tour!”