The Leviathan series is these three novels:

Prince Aleksander, would-be heir to the Austro-Hungarian throne, is on the run. His own people have turned on him. His title is worthless. All he has is a battletorn war machine and a loyal crew of men.

Deryn Sharp is a commoner, disguised as a boy in the British Air Service. She’s a brilliant airman. But her secret is in constant danger of being discovered.

With World War I brewing, Alek and Deryn’s paths cross in the most unexpected ways, taking them on a fantastical, around-the-world adventure that will change both their lives forever.

You should totally watch the trailer for the series.

There’s also The Manual of Aeronautics, the full-color art book of the series! 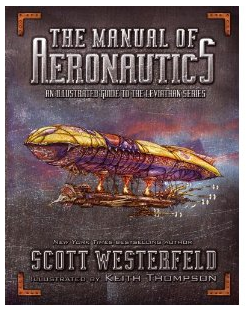 “Full of nonstop action, this steampunk adventure is sure to become a classic.”
—School Library Journal

“When a book pursues you into your dreams, you can’t ignore it.”
—Sunday Telegraph

“Wouldn’t it be cool if the First World War had been fought with genetically engineered mutant animals, against steam-powered walking machines? And the answer is, Yes, it would.”
—The New York Times

“The request line for the sequel can start forming now.”
—Bulletin of the Center for Children’s Books

And here’s Alan reading the first chapter of the the second book, Behemoth, also available NOW.

Here are a couple of interviews I did with Alan while making the audiobooks.

The coolest thing about this series for me has been working with illustrator Keith Thompson. We decided to make the books look like they were published back in 1914, when almost all books (even adult) were illustrated. So Keith created a sort of “Victorian manga” style, part steampunk and part old-fashioned biotech. We’re putting about 50 pieces of art in each book, most of them full page!

Yep, that’s how good Keith’s illustrations are. Again, these are only four of fifty—in other words, eight percent of the total art!