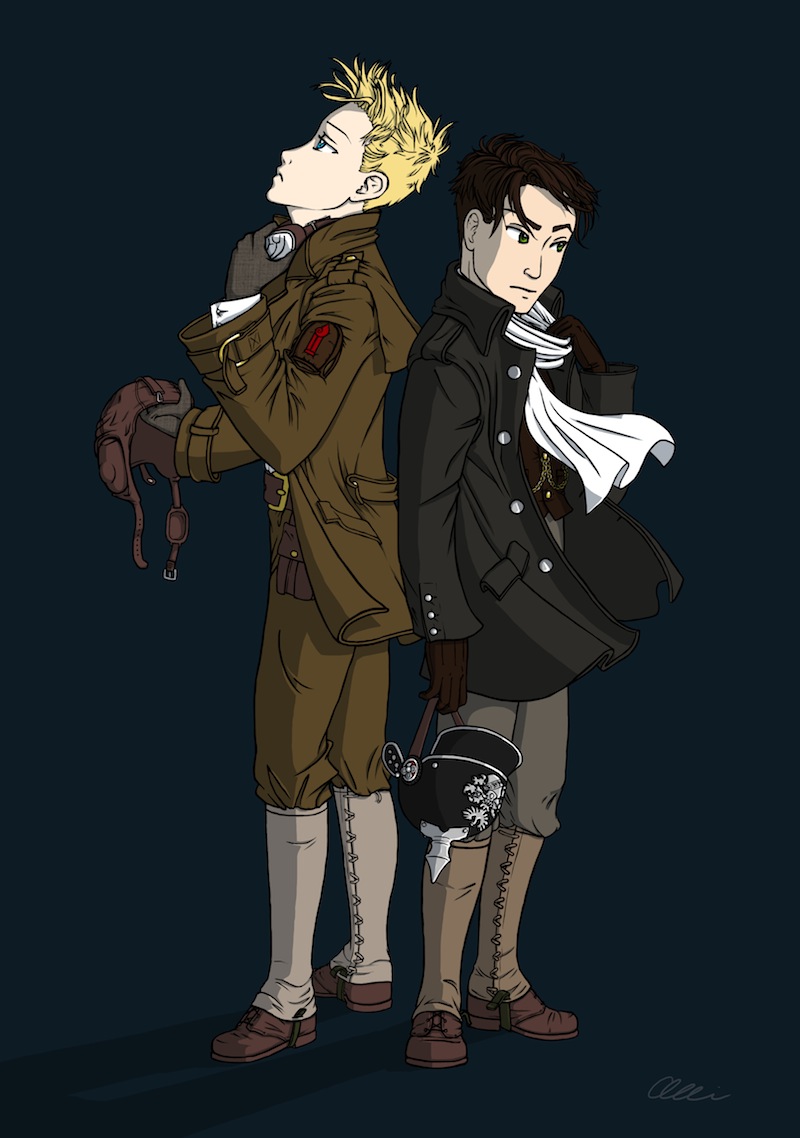 I actually commissioned this image from Allison B. Thomas, whose work I’ve been following for a while. Since I always refer to Keith’s style in Leviathan as “Victorian manga,” I thought it would be cool to see the characters in a real manga style.

It’s cool how the clothing above (wind-swept, as always in manga) feels almost as detailed as in Keith’s incredibly fine-lined work. It’s a great translation from one style to another, which my favorite thing about fan art. It’s kind of like alternate history, art-style. (Or something like that)

But seriously, go check out Allison’s other work.

Here’s a piece from Haley A., in the great tradition of the Uglies series cover redux:

I love how many people have sent me images of themselves as Tally. It’s an interesting form of character identification—Tally as everygirl.

And finally we have a rare piece of The Last Days fan art from Katja K.: 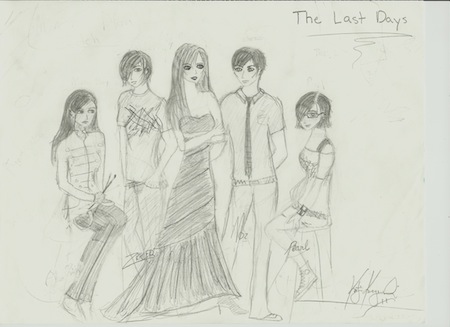 And by the way, if you’ve sent me fan art and it hasn’t appeared, please send it again! Just make sure to use the term “fan art” in the subject line. I seriously get a lot of email and stuff gets buried.

Okay, back to finishing Goliath. More on the tour soon.

Okay, lately I’ve been the worst blogger ever. This is partly excusable because I’m working hard on Extras, but it’s been almost three weeks since my last post, and that’s a bit ridiculous. I’m also very behind on fan mail, for which I apologize to you all.

That’s right, questions asked in fan mail will now be answered here, eventually providing a comprehensive list of answers so that I never have to think again!

Of course, I will still try to get back to you all personally. It may take a while, however. Not because I don’t love you all, but simply because you outnumber me.

And now for my first questions. Some classics mixed up with some new and unfamiliar ones.

Where does Uglies series take place?

This question has been asked and answered many places, but here’s the official word:

The unnamed city where Tally lives is roughly where Seattle is now. (So the Rusty Ruins are the ruins of Seattle.) The ocean that Tally travels along is thus the Pacific, and the Smoke is somewhere up in the Canadian Rockies. As many of you have realized, Diego is descended from modern-day San Diego.

Here’s a news flash: Extras will take place in what we now call Japan!

What started your career in writing?

In the early 90s I worked for MacMillan/McGraw-Hill, which I’m sure many of you know as school textbook publishers. I was in charge of their NYC technology office, designing educational software and other cool stuff.

One lucky day in 1995, they decided to move their technology departments up to Connecticut, and offered me the choice of severance (that is, money) or moving out of NYC. I thought about this for about ten seconds and then said, “Give me my check and color me gone. I’m off to be a writer.”

Five adult books later, I got the idea for Midnighters. With its teenage heroes and gothic high school setting, this was clearly a teen book. So I became a teen writer.

Some people ask why I decided to become a teen writer. But it didn’t happen in the abstract. I simply got an idea that was YA-ish, and then had so much fun writing for teens that I haven’t (yet) gone back.

What with Wii, Tivo, and those internets I keep hearing about, do you ever worry that teens will stop reading?

Despite all the competition for their time—TV, movies, social networking sites—teens still read a lot more than older age groups. I think that’s because when you’re young, you read more intensely; a book can completely change your way of looking at the world. Once you’ve discovered that magic, it’s hard to give up.

It’s adults I worry about.*

*According to this NEA study, only about 57% of adults in the US read any book at all in 2002. Children’s book sales, on the other hand, have been screaming upward for the last ten years. So nyah.

Random Update: Those of you who get the NY Times should check out page 18, the children’s paperback list. w00t.