For the last couple of years, the USC School of Cinematic Arts World Building Media Lab has been working on a project based on my Leviathan series, in partnership with Intel. I visited the lab last July, and took lots of cool pictures, but have been waiting for them to reveal their work publicly before jumping in. They have, and I am.

What the lab is doing is a combination of high technology and storytelling, or what some of them call “extreme Leviathan fan fiction.” They’ve created a 3-d virtual model of the airship, both inside and out, backstories for all the crew members, and a host of ancillary material, like diaries and historical timelines (more detailed than any in the novels).

This expanded world can be experienced in a lot of ways. As print: 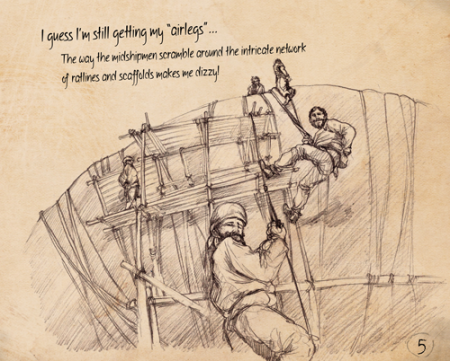 Or by walking around in the 3-D models of the airship using VR helmets and interact with the characters, which is what I’m doing here: 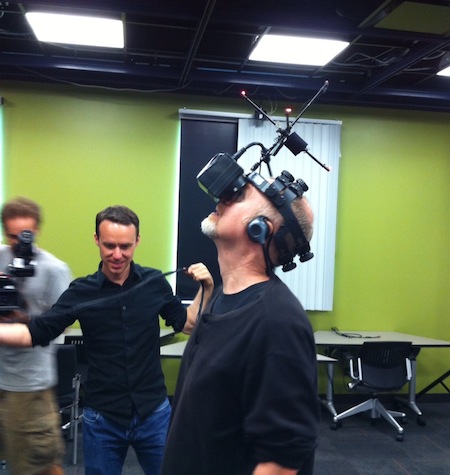 Or in a large group of people, interacting in 3-D with the story-stuff using tablet tech, like here at CES:

Obviously, this is pretty cool. (Note: The whale in that footage can only be seen through a phone or tablet, so many of the people there couldn’t see it. But a lot could, as you can hear from the cheers.) And it’s pretty overwhelming to walk into the labs at SCA and see all these smart people working in my world. It’s not unlike encountering fan-fiction archives based on my work, except this one has a multi-million-dollar budget for multimedia. In terms of material detail, this kind of world expansion takes Leviathan well past where Keith and I did.

And really, this is “future of entertainment” that people blather about. Not any specific technology, like tablet-3D or VR helmets, but this cooperative, expansive world-building. Whether it’s created by corporations who command massive resources and a stage at CES or a few thousand fan-ficcers typing quietly in the night, the thing that’s cool is the same: Someone gets inspired by my text (and Keith’s illustrations, of course) and deciding that this world MUST GET BIGGER, and, by jove, they’re the person to do it.

Of course, this is also the past of entertainment, when nobody “owned” stories, and everyone added to whatever was being told around the campfire. But new technologies do expand the ways we can make stories bigger, both in the objects we can create (3-D models!) and the ways we share them (Deviant Art!). So yeah, it’s not just the campfire anymore. It’s more like a campfire that’s linked to all the other campfire, and we can control the flames.

By the way, I love SCA’s redesign for the Leviathan itself, even though it’s not the bowhead whale of Keith’s (still canonical!) illustrations:

Anyway, I have more of this stuff to share with you (Click here for more from their press kit), but I have the rewrites for Afterworlds due on Monday, so I really should stop procrastiblogging and end here.

(Bonus Info: That Uglies news that I’ve been promising you almost fell through, but then it didn’t. And it will be released for public consumption sooner or later.)