Breaking news from World Headquarters: So Yesterday was just bought by Bonnier Carlsen, a publishing house in Sweden. Big props to Whitney Lee at Fielding Agency for selling that book all over the globe. 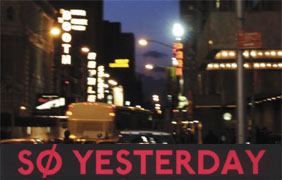 I always suspected that So Yesterday might sell well internationally. As a consumer satire, I figured that it should appeal to foreign folks who find us inch-using, doctor-paying, soccer-not-playing ‘Mericans to be inherently funny. I’m glad to see that I was right.

I didn’t think of this when the French rights sold, but I’m very curious as to how the Spoonerisms in the book will work. (For you who are too lazy to click: a Spoonerism is a humorous reversal of word beginnings, like “May I sew you to your sheets?”)

Spoonerisms form a key plot point in So Yesterday, and are supposed to generate a lot of laughs. But does Swedish even have them? I mean, William Archibald Spooner himself was a don at Oxford (the place where they make that cattle-stunning dictionary of English) so there’s no guarantee that speakers of other languages even know what Spoonerisms are . . .

Sounds like a tough ask for the translator. I just hope he or she is a shining wit.

Now, I’m a self-confessed language geek. (My sophomore novel, Fine Prey, is about a xenolinguist, and you can’t get much geekier than that.) But I know next to nothing about Swedish. So I have no guesses as to the Swedish title, or whether the character-name puns (like “Hunter”) will translate well, or how those all-important Spoonerisms will fair.

My only tidbit to share comes from my Swedish-Aussie pal Kim Selling, who once explained to me during a long car ride in the Outback that the Swedes are to farting as the Inuit supposedly are to snow. That is, they have a lot of words for it. This is probably the result of spending a lot of time in saunas together, a natural environment for the linguistic dissection of flatulence.

So a brief and probably inaccurate primer on Swedish gas-passing:

I’m sure there were more. I’m waiting for Kim and any other Swedaphones to weigh in on this important issue.

And if you object to this post, just remember that Spamalot just won a butt-load of Tonys. Don’t make me pruttar in your general direction, yo.

8 thoughts on “So Yesterday in Swedish!”