Westerfeld’s Law #1: When you live around the corner from the best Thai food in Sydney, you eat a lot of Thai food.

Westerfeld’s Law #3: When you stare longingly into a telescope store frequently, you eventually BUY A TELESCOPE!

The laws in graphic format: 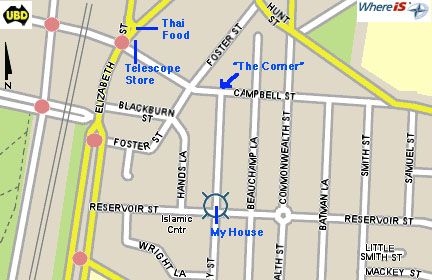 Or to put it another way, I have bought a telescope . . . 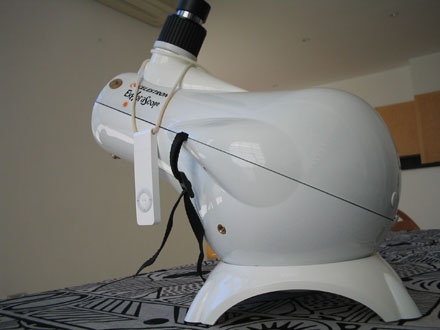 My little Celestron is very cool. It’s quite small and indestructible, as you can see, perfect for taking camping (or, say, to boutique hotels out in the country). It takes up zero room in the house, and swivels around quite pleasingly on its little base. The fact that I don’t have to set up a tripod means that I will actually use it, rather than it gathering dust.

But one thing I will say is, it’s really a stupid idea to have telescope stores open during the day. Like, what are you supposed to do for the hours between purchase and sunset? Well, I briefly watched this couple breaking up on the veranda of a nearby apartment complex, but one really shouldn’t do that sort of thing.

So mostly I looked at Centrepoint Tower, and experimented with putting my digital camera right up to the eyepiece:

But mostly I was waiting for friggin’ Mars to rise! Celestial dance, my ass. It took forever!

Finally, though, the splendorous red planet arose. And was really hard to find. That’s what I always forget about telescopes, all that looking through a narrow tube for a little dot. How did Gallileo and those guys ever manage to, like, discover stuff?

But finally I found Mars, and it was pearly and beautimous and red. I can’t wait for Jupiter to return to the southern night skies, and for the moon to reappear. I love my telescope. (And must now purchase a more expensive one.)

Also, I have vowed never again to use my telescopic powers for evil, even to find out what happened with that couple who broke up. I will only look at the moon and stars, and possibly Centrepoint Tower when bored during the day.

PS For comparison, this is what Centrepoint Tower non-telescopically looks like from my window: 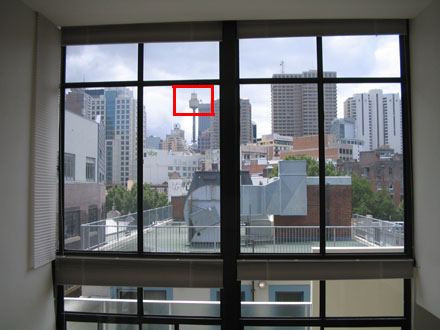 I’ll see if I can take some lunar pictures, once the moon comes back. Stupid new moon.