The next entry in the ongoing International Covers Week (Month? Year?) is the following: 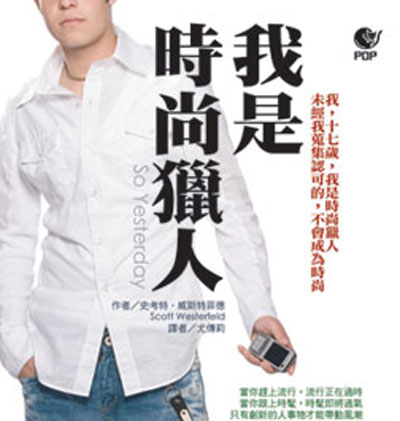 It’s the complex Chinese version of So Yesterday.

“Complex Chinese?” you may ask. “Isn’t all Chinese pretty complex?”

Here’s a factoid that I didn’t totally get until I started to be translated: There are two written types of Chinese. Allow me to explain.

Complex Chinese is the traditional written form of the language. It goes back millenia—way before our Roman alphabet, way before anything else currently in use. But people still use it in Taiwan, Hong Kong, and Macau. On the other hand, simplified Chinese was created in the last century, when the Chinese government was trying to make all those ideograms easier to learn. It’s used in mainland China, Singapore, and Malaysia.

Luckily for us authors, these two kinds of Chinese are usually sold to different publishers. We get to sell the same book twice! For example, Jelei in China owns the simplified rights to Uglies, and Sharp Point in Taiwan owns the complex rights for the same book.

So Yesterday is published by a Taiwanese company with my favorite name ever: Meowbus. Check out this cool feature on their site: behind-the-scene photos of the cover shoot.

What a great idea, especially for a teen imprint! This is the sort of thing that might actually make someone want to go to a publisher’s website (even if it is in complex Chinese).

23 thoughts on “Chinese So Yesterday”