UPDATE
From now till January 4, the UK e-book of Afterworlds will be available for £1.49.
Click here to buy it from Amazon.
Or here to but it from Sainsbury’s.
END OF UPDATE

Greetings from Sydney. I’ve been here for a month now, recovering from the Afterworlds tour and putting the finishing touches on my next novel. (The title, etc. of this book is secret now, but much will be revealed early next year.)

In the meantime, and with due deference to the season, here are a couple of cool items to compliment your Hanukwanzamas haul:

Barnes & Noble has a signed and bonus content edition of Afterworlds on its shelves now. The extra material is one of the chapters that Darcy discarded after receiving her editorial letter. (So it’s part of Darcy’s book, pre-rewrites!)

This edition has two stickers on it, one for the extra content and one because it’s signed by me:

Alas, you can’t order the signed version online. But you can order the bonus content edition (without signature) right here.

For Uglies fans, I earlier this year wrote a short story called “How David Got His Scar.” The story is set in the time before David has met Tally, but after Shay’s runaway friends, Croy and Astrix, have reached the Smoke. It tells the secret story of David’s eyebrow scar.

To find this B&N hardback exclusive edition of Uglies, look for this black sticker in B&N stores: 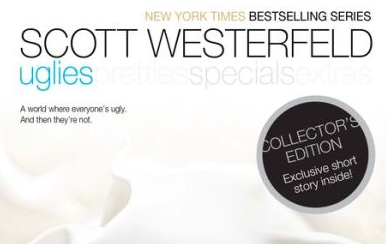 You can also order this edition online right here.

Okay, there are some other holiday deals out there, but I can’t remember them. Will update this post when I do.