As most of you know, my latest series is Zeroes, a trilogy about teens with superpowers, which I cowrote with Margo Lanagan and Deb Biancotti.

You can read the first seven chapters here, and find reviews and buy buttons here.

Today I’m happy to share with you the awesome US cover of book 2, which is called Swarm! (Out in Sep/Oct 2016.) 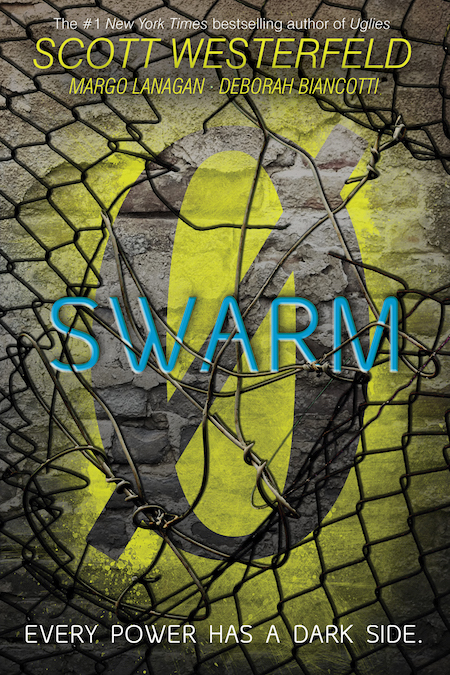 Pretty cool, huh? I like the way it doubles down on the lurid color scheme of the first cover.

They thought they’d already faced their toughest fight. But there’s no relaxing for the reunited Zeroes.

These six teens with unique abilities have taken on bank robbers, drug dealers and mobsters. Now they’re trying to lay low so they can get their new illegal nightclub off the ground.

But the quiet doesn’t last long when two strangers come to town, bringing with them a whole different kind of crowd-based chaos. And hot on their tails is a crowd-power even more dangerous and sinister.

Up against these new enemies, every Zero is under threat. Mob is crippled by the killing-crowd buzz—is she really evil at her core? Flicker is forced to watch the worst things a crowd can do. Crash’s conscience—and her heart—get a workout. Anon and Scam must both put family loyalties on the line for the sake of survival. And Bellwether’s glorious-leader mojo deserts him.

Who’s left to lead the Zeroes into battle against a new, murderous army?

4 thoughts on “Cover for Zeroes 2: Swarm”