While writing Leviathan, I did a fair amount of research on women who passed as men to serve in the armed forces. I also checked out the laws about women wearing men’s clothing, to find out what would happen if Deryn were ever caught in her deception. Armed with this knowledge, I can inform you that this is a very important day . . .

It’s the hundredth anniversary of the Explicit Legalization of Pants in Kansas! (Otherwise known as ELPK Day.) 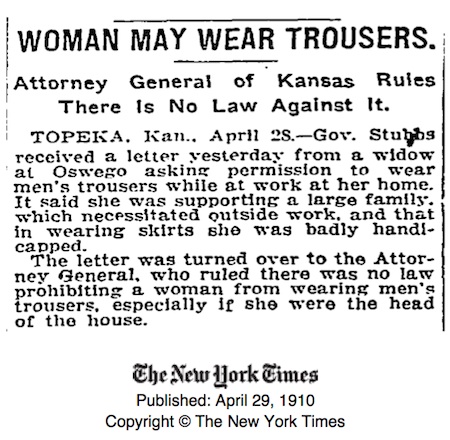 As you can see, the word “Explicit” is very important in Explicit Legalization of Pants in Kansas Day. Pants were already legal for women to wear, after all. But note that last clause: “there was no law prohibiting a woman from wearing men’s trousers, especially if she were the head of the house.”

In other words, it’s legal to dress like a man, but really only acceptable if you’re already an honorary man—i.e., a widow and a breadwinner. (Seriously, since when is something especially legal? Either it’s legal or it’s not, dude.) ELPK Day comes with certain restrictions, it seems.

Research gems like this one are what makes writing historicals so strange and wonderful. Every detail of this article reveals a bit more about the tenor of the times, and about how actions may be strictly legal, and yet still cause a stir.

I mean, clearly this woman wasn’t writing the governor of her state for fun, or for fashion advice. Was she getting hassled by her neighbors, or even the local cops, for wearing pants? And note that she wasn’t wearing pants for jury duty, say, but to work in her own damn garden.

Even more intriguing, this little story from Kansas gets a mention in the New York Times. So these sorts of conversations about the proper role and place of women must have been happening everywhere. So ELPK Day isn’t just in Kansas anymore, it’s going national!

Of course, it’s easy to laugh at this, and reassuring to think that we no longer live in a world where women have to get legal advice for something so simple as wearing men’s clothes, right?

Because just a few days ago, on almost exactly the 100th anniversary of ELPK Day, a student named Ceara Sturgis has found herself erased from her school yearbook. Why? For wearing a tuxedo in her senior photograph. And when I say erased, it’s not just that the school administration wouldn’t print the photograph. No, they actually deleted every mentioned of Ceara from the yearbook, even though she’s an honor student, the goalie of the soccer team, and plays trumpet in the band. (See update below.)

By the way, she’s also a lesbian. So wearing this tuxedo wasn’t about flouting some imaginary dress code, but about who she is. That’s what clothing means in all these conflicts.

After all, it’s the trousers that our unnamed widow wore while gardening that said, “Hey, I’m the head of this family. My labor is what keeps us fed. Deal with it.” And the uniform that Deryn wears that says, “I’m as good an airman as any boy, so you can all get stuffed.” And it’s the tuxedo you wear in your yearbook photo that says, “I am who I am, and twelve years in your school hasn’t changed me. So I win.”

So, yes, these Explicitly Legal Pants are very important. Because even now, a hundred years after ELPK Day, we still have small-minded people around to tell us what we have to wear, and trying to tell us who we can and cannot be.

I hope she sues the pants off them.

Update:
In the day since I posted this, the Jackson Free Press article linked to above has been updated. It seems that Ceara was included in some sections of the yearbook, including a page she paid for, but not the senior pages. Less Orwellian, to be sure, but still despicable.

And a note on dress codes: This isn’t really a dress code issue. As Fox News explains:

“[Ceara’s mother] said she met with assistant Superintendent Ronald Holloway who told her he didn’t see regulations about the issue in the student handbook.”

This was an ad hoc decision made after Ceara turned in her photo. It’s not about school administrators blindly following silly regulations, it’s about them making up silly regulations after the fact. In other words, it’s about a sustained and personal attack on one particular student in their care.

These people should get different jobs.

51 thoughts on “Why Pants Are Legal in Kansas”