Hey, sorry it’s been so long between posts. Justine and I were at Conjure up in Brisbane over the weekend. It was the Australian national sf convention, and a great time was had by all.

The most hilarious thing was the Juvenalia panel, in which Justine, Kim Wilkins, Sean Williams and I all read from our childhood and teenage writings. And oh, my, god was it funny. For the audience, at least. A friend of ours later said, “You guys’ body language got all teenagery as you read, as you madly shifted in your seats and rolled your eyes.”

And with good reason. Maybe I’ll post some of my juvenalia here some time. For any of you young’uns writing now, it will be eye-opening as to how much better you can get.

Kim’s stuff was very sweet and earnest, including a traffic safety guide penned when she was seven(ish). Sean, of course, had planets blowing up (his excellent novel Geodesica: Ascent also won the Ditmar Award at the convention—it is highly recommended). And Justine’s 15-year-old work was eerily like her current stuff.

It was a cool experiment. Yay to Kim for having the idea.

Upon our return to lovely Sydney, we discovered a cover mock-up for the Italian version of Uglies! Here it is in very rough form: 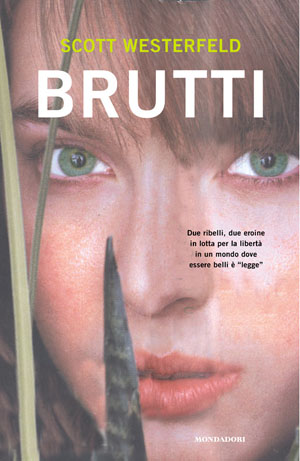 What’s interesting is that the face is pulled around from the back of the book, so there are two eyes instead of one. The face is also flipped, and, of course, the title’s on top now. Hmm. What do you guys think?

In Bologna, our Italian editor said she was having trouble with the title. She didn’t think that Brutti was as sonorous as Uglies, but couldn’t think of anything else that would make sense in Italian. But like I said, this is still a rough draft.

By the way, can anyone translate the tag line? Something about “Two rebels, two heroines . . . “?