One of the cool things I found out on the Leviathan tour was that the libraries of Howard County in Maryland are doing a little experiment called Pass the Book.

Here’s how Pass the Book works:

Step Two: Tag each one with its own unique tracking number.

Step Three: Release them into the wild!

Step Four: Let people read the books, register them online, and pass them on as they see fit.

That’s right, six hundred copies of Midnighters: The Secret Hour are being given away free and are traveling across the country right now. They look like regular copies, except for this sticker: 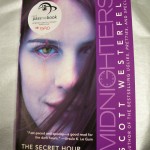 There’s also a page inside with detailed instructions on how to register the book online. To check out where the registered copies are right now, just click here.

I was given one of these books at my appearance in Baltimore. To be precise, it was Midnighters number 130, a multiple of 13! It flew with me to Los Angeles that very night, where I gave it to a bookseller. So hopefully it will appear on the map soon.

If you find number 130, let me know! There are also three other copies that I autographed, all of which are multiples of thirteen.

Click here to read more about Pass the Book.

Touring Update: Justine will be in Philly tomorrow, Thursday, to talk about her new book Liar. I’ll probably come along to say hi, so maybe see you there.

Click here for the rest of Justine’s appearances. And here for my remaining tour details, including Canada. And click here to buy my new book, Leviathan!

In other news, it’s time for a special Halloween Walker Wednesday!