Just in case you thought I’d given up serious blogging to spend all my time trolling (or perhaps trawling) Deviant Art, let it be known that I just wrote a real essay about Literary Things.

It was for Tor.com‘s Dystopia Week (to which I say, ONLY A WEEK?) and was an analysis of why teenagers like tales of dystopia.

The funny thing is, lately everyone wants dystopia essays from me, because dyslit is BIG and I am officially a famous fake expert in how teens think, especially about dystopian fiction, thanks to the whole writing Uglies thing. (Score.)

It’s little wonder, then, that a lot of YA dyslit embraces both extremes of hyper-control and of chaos, wedding an oppressive government with post-apocalyptic ruin . . .

Click here to read the rest. And then comment here or there with your gentle sledgehammers of correction. Don’t let us fake expert adults define you!

And now . . . back to trolling Deviant Art! Because it’s Fan Art Friday. (Well, not here in Sydney, or even in New York, but somewhere in the world. Like, say, Hawaii.)

Here’s a cutie from strawberrycream17: 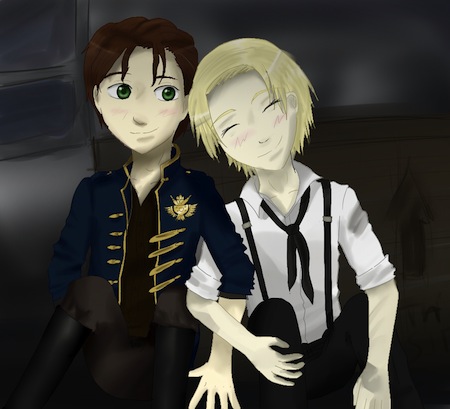 And another quiet moment from Tobuishi, who, after last week’s Fan Art Friday, quite understandably requested that I use a piece of hers that didn’t have the word “boobs” in it: 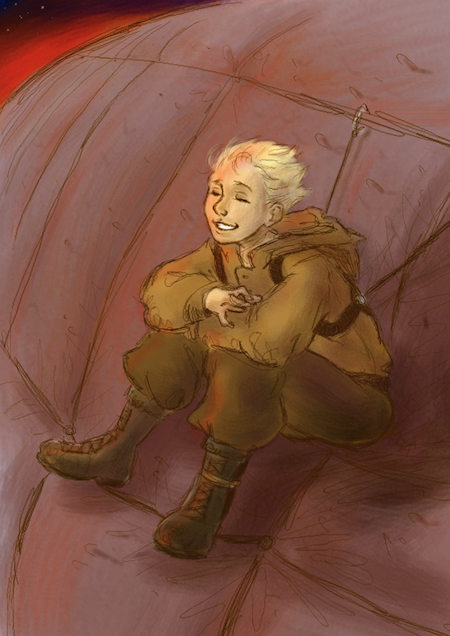 Click here to see her other stuff at DA.

I love how a lot of fan art and fan fic shows characters doing, you know, sort of nothing. Fan artists like showing the downtime that’s part of everyone’s real life, but doesn’t ever quite get shown in canonical texts, because doing nothing isn’t part of the uber-dramatic Story we authors are telling. Believe me, if we put it in there, editors would probably edit it out!

Fans actually want to see the downtime, though, or at least imagine it, because that makes the characters more real, more like someone you could hang out and do nothing with. So downtime becomes a major theme of the para-literature of fan fic and fan art.

Maybe I’ll save these thoughts for another essay about Literary Things. But you know I’m right.

And speaking of just hanging out, here’s another example, by Irrel, of everyday life aboard the Leviathan:

HAH! GOT YOU! Awkward moment is awkward! (Here’s the source on DA.)

Okay, some fan art is totally dramatic, telling its own fantabulous non-canonical story, or even predicting what will happen in a not-yet-published book like Goliath. This is why writing Serious Essays is a pain, because you have to keep second-guessing yourself.

So for the next Fan Art Friday, let’s do something different. Send me art that’s not regular two-dimensional drawings and such. You know: fan fic, sculpture, cosplay, music, models, video, photography, or whatever else you can come up with or find out in the interwebs.

I’m curious as to how much is out there. And I think we’ve had quite enough of a certain couple’s canoodlings!