I’m headed out to the Blue Mountains for a weekend of birthday fun, so there will be no Fan Art Friday this week. Instead, allow me to belatedly roll out the new Uglies covers!

They’ve been around on the internets for a while, but I haven’t shown them here. The new covers are finally leaking into stores, though, so now is a great time to show them. 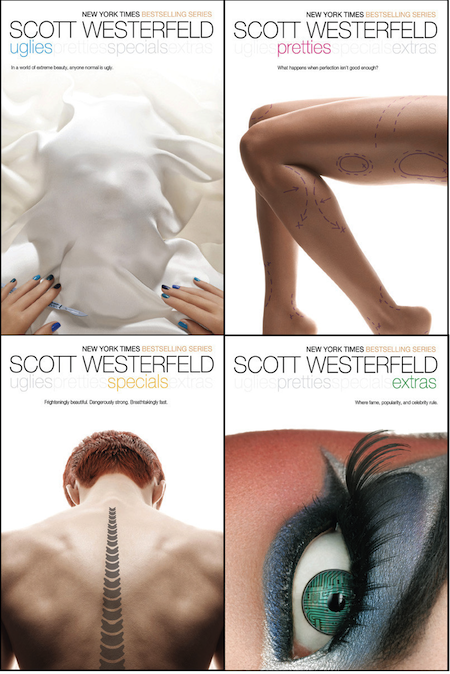 Of course, whenever new covers appear online, they create dissent and controversy. Fans mostly don’t like new looks for books, because the old covers are the ones they’re used to. If you’re a fan, after all, that old look was probably the reason you picked up the books in the first place!

So really, the new covers aren’t for fans at all. You guys already HAVE my books, after all. These are for all the people who’ve never picked up Uglies because the old covers looked boring or stupid to them. Maybe they never even noticed the series on the shelves. It’s for non-fans (who probably don’t read this blog) that this new look exists.

So feel free to complain!

For me the Original Style covers are still classics, but I get why S&S has to hit the refresh button after, what, six years? And you have to admit that these new covers are very lovely indeed, and are unified in a way the Original Flavor ones weren’t. (Pretties had a different designer than the other three, in fact. You can tell.) The new ones also have a cool, clinical feel that nails a lot of what the series is about.

So, thanks, Rodrigo. The rest of you should click here for an archive of his other work. I think you’ll agree that the dude rocks.