The Associated Press is reporting that H5N1—also known as “that avian flu that’s maybe gonna kill us all”—has a new vector*:

As readers of Peeps will know, this is a sure sign of The End Times. Well, okay, not really. Unlike my vampirism-causing parasite, H5N1 hasn’t yet been proven to move from cats to people. Of course, no one’s saying that it can’t happen, either.

Felines are scarier carriers than birds, if only because most of us don’t have chickens in our house. Pigeons don’t sleep on our chests at night. Turkeys don’t wind around our ankles when we get home. How much contact do we have with cats? Well, half of all Americans are infected with toxoplasma, a cat-borne brain parasite that changes human personalities. (Biology is kewl.)

For those of you who haven’t read my novel Peeps, it’s about a parasite that causes vampirism. The parasite starts out in rats, moving in times of crisis to cats and through them into humans. It’s kind of disturbing to see such a strong parallel in the real world. Especially as H5N1 is worse than the peeps-parasite in two ways:

1) It starts out in bird reservoirs, which can spread the disease globally much faster than rats.
2) It doesn’t give you any super powers. No night vision, no super-hearing. Zip.

The AP report goes on to make these points:

”We know that mammals can be infected by H5N1, but we don’t know what this means for humans,” [Maria Cheng] said.

[Thomas] Mettenleiter said there are no known cases of the virus moving from cats to humans, but he still cautioned pet owners on Ruegen [a German island in the Baltic Sea] to keep their cats inside for now.

”An infection of humans, which theoretically cannot be ruled out, could probably only occur with very intimate contact to infected animals,” Mettenleiter said.

So don’t toss your kittens into the fire yet. But quit, you know, kissing them.

And here’s some appropriate fan art from Jade Lennox: 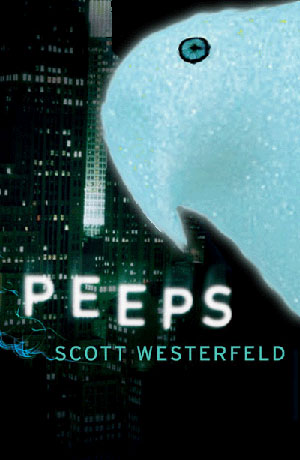 This all reminds me, the beautiful Australian edition of Peeps just arrived in my mailbox, and hits stores in April.

________
*Note that this is merely the first time that H5N1 has been discovered in mammals in Europe. In Asia, there have been earlier incidents of captive, poultry-fed tigers and leopards contracting the virus, and one case of transmission among house-cats. Sorry for being Euro-centric, but I didn’t catch this till now.