Well, after a very productive month in our Undisclosed Location, Justine and I have both finished our next books! Much wooting occurred.

Of course, there’s still all the rewriting, editing, cover designing, catalog printing, marketing and selling into stores that has to happen. All of which means these books won’t be published until, oh, about a year from now.

This is why Bogus to Bubbly is coming out on October 21, to make the long year of waiting fly past. (Zoom.)

In the meantime, I can get back to blogging a bit more often. Thank you all for your patience during crunch time! Sorry to have been away.

There are a few things I missed. First, here’s the cover for the Brazilian version of Peeps: 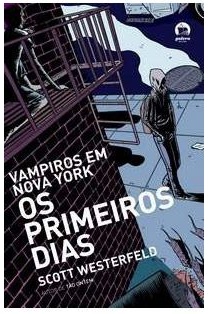 I really like this cover. It’s sort of like a graphic novel, with plenty of peeps-like images. As you can see, the title is Os Primeiros Dias, or “The First Days.” I guess “peeps” didn’t translate into Portuguese, so the publishers thought it would be cool to set up the sequel, The Last Days.

I wish I’d thought of that. Well, except that when I was working on Peeps, I didn’t realize I was going to write a sequel.

And if you’re a Peeps fan, you totally have to read this article in the NY Times. It’s about a scientist who infects his patients with hookworms (as in Chapter 5, aka “Bahamalama-Dingdongs”) . . . on purpose!

So here’s the story: David Pritchard, the scientist in the article, noticed that people in Papua New Guinea who were infected with hookworms were less likely to suffer from asthma and hay fever. Now, this was nothing new. As I point out a few times in Peeps, parasites are so intertwined with humans that we can get sick when we don’t have them around.

Basically, your immune system has evolved to deal with lots of parasites—our ancestors lived in a very dirty world compared to us. But these days, people in industrial societies have hardly any parasites, so our immune system gets bored and starts making trouble. Sort of like a third-world army with no enemies to fight, it starts trying to take over the government. Allergies, asthma, Crohn’s disease, and other auto-immune issues may be related to people being too darn clean!

Dr. Pritchard wondered if hookworms were suppressing the Panuan’s immune system, and helping them escape hay fever. So, in the proud tradition of mad scientists everywhere, he used himself as a subject. That’s right, he infected himself with hookworms, which sounds . . . itchy. He has since expanded to larger human trials, and so far the treatment seems to work well on allergy sufferers. Maybe one day it can be used for more serious conditions, like Crohn’s Disease.

Good luck to him. Plus, I love this last paragraph:

“I gave myself 50 worms, and I felt it,â€ he recounted. â€œI had stomach pains and diarrhea. But with 10 worms, weâ€™ve ascertained a dose that does not cause symptoms. The patients are happy. Theyâ€™ve kept their worms, and I get an e-mail a day from people all over the world who want to be infected.â€

See? Everything in moderation.

81 thoughts on “Done and Done”