Next Tuesday, September 16, is the release date of Justine’s next book, How to Ditch Your Fairy! 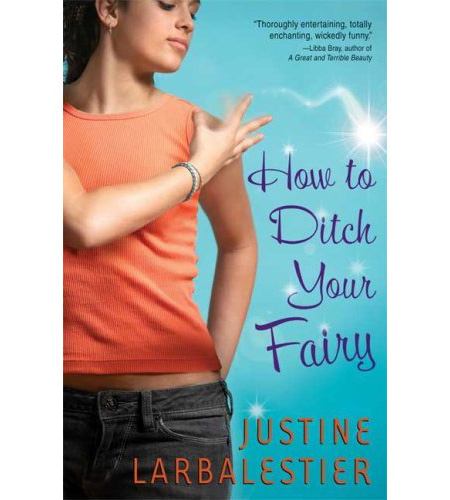 How to Ditch Your Fairy is set in a world where everyone has their own personal fairy. These creatures are invisible, but they have a huge effect on your life. Each one has its own special power, so you could have, say, a “good-hair fairy” and your hair would always look amazing, styled by unseen winds. Or a loose-change-finding fairy, and you’d always find a quarter when you needed one.

The protag of the book, Charlie, has a problem, though. Her best friend, Rochelle, has a clothes-shopping fairy, so whenever Rochelle goes into a store, she finds the perfect dress . . . and it’s on sale! Even more annoyingly, Charlie’s worst enemy has an every-boy-will-like-you fairy—and that includes the boy that Charlie likes.

Charlie herself has something much more lame: a parking fairy. Every car she’s in gets a parking space right next to where it’s going. Now, you’d think this would be handy. But it means that since she was a baby, Charlie has been borrowed by friends and family and distant relatives to go to concerts and sporting events and museums and court appearances that she doesn’t want to go to, just because they’ll get a parking place.

By now, she totally hates cars. So the book is about Charlie trying to ditch her fairy, and swap it for a new one. As you can probably tell, it’s a comedy with lots of thrills and spills.

Click here for Justine’s story of how she came up with the idea. And here’s her bio on her flashy new website.

In honor of the release, Justine will be touring for the next few months. Next week, she’ll be in northern California, then doing a couple of dates near home. In October she’ll be in Ohio and Michigan, and in Texas for November. (I’ll be traveling with her some of the time, and maybe popping in to say “hi” in a few places, but this is her tour, not mine. I will be officially appearing at Book People in Austin, though, and I am looking forward to seeing a few of you.)

You can order HTDYF at Powell’s, Amazon, or Barnes and Noble.

Click here for details on all of Justine’s tour dates.