Given that Leviathan is coming out on October 6, I thought we should retire the old Extras look and get all steampunk’ed around here. Hope you enjoy the gears. (Mmmm . . . gears.)

Thanks to all the folks who made this possible, especially Deena Warner Design and all the folks at Simon & Schuster. Without them, this wouldn’t look so fabulous. In fact, it would look exactly the same as it used to, because I’m way too busy these days to work on non-book stuff. 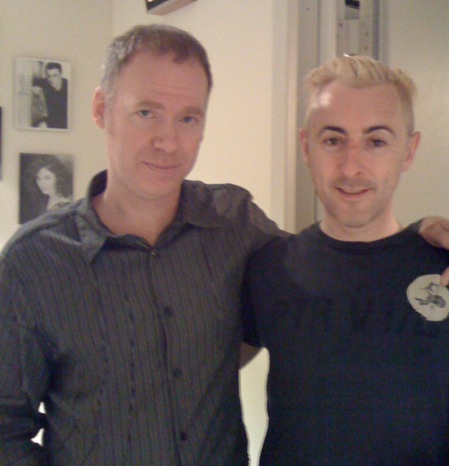 I really enjoyed listening in. When I got to the studio, Alan (um, if I may) was just starting the huge battle scene in the middle of the book, and he was really rocking it. He’d invented voices for all the characters, which was freaky for me (but in a good way). Everything was so much more dramatic than how I read my own stuff aloud. Old-school storytelling is really nothing less than magic.

Alan was working off a specially marked recording script, and hadn’t seen the art yet. So over lunch we went through the Big Book of Illustrations I carry around with me, and he was suitably impressed and kept saying, “This should really be a movie.” (I told him he should play Count Volger, and he was down with that.)

Then we talked about old Saturday Night Live sketches, which I’ve done with a lot of people over the years, but not anyone who’s actually hosted the show.

It was loads of fun, and he had the grace to notify me when there was something unattractive stuck between my teeth, which is really all I want in a celebrity. (Note to self: black bean soup = tactical error.)