For the last month or so, there’s been a cosplay contest happening over on FaceBook called “Show Us Your Steampunk.” To enter, contestants had to dress up and hold a book from the Leviathan series. There were a ton of great entries, but there could be only three winners! (Selected not by me, but by “like” voting.)

The grand winner was Whimsy Dreaming, who formed a spectacular steampunk trio: 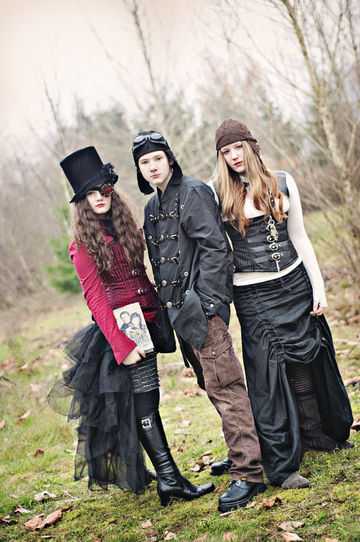 They win Deryn’s actual flying goggles and hat, as worn by the models on the cover of Behemoth and Goliath, plus a signed set of the Leviathan trilogy, AND a full set of the Uglies series.

I met you guys, didn’t I? (In Austin, I think. The tour all blurs together.) Well done. Plus, you should totally form a band.

And in second prize is Sarah Spitzer, with this winsomely posed picture that uses the ineffable power of CAT.

Sarah wins Alek’s flying googles featured on the cover of Leviathan and Goliath and a signed set of the Leviathan trilogy.

And finally Salome Gongadze, whose hat just gets more awesome the more you stare at it.

Salome wins a signed set of the Leviathan trilogy.

40 thoughts on “Show Us Your Steampunk Winners”