Justine and I have spent the last six weeks traveling in the US, which is why there have been zero postings here. Apologies! I realize that this hasn’t been a very bloggy year for me, but it has been a writey year, and which would you rather have, really?

Let me take you on a slideshow of various things I did while in the States:

Shortly after I first arrived, I was greeted by the sight of my latest publication on bookstore shelves. It’s an essay in a collection called Breakfast on Mars, edited by Rebecca Stern and Brad Wolfe. Basically, it’s a bunch of YA writers taking on the dreaded essay, many teen’s least favorite form of writing.

My essay, for reasons you might guess, is all about illustrations in books. 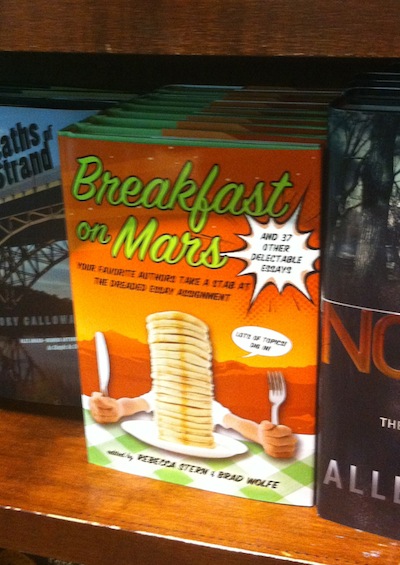 If you’re a teacher or librarian, or anyone interested in non-fiction writing, you should check it out. If you ask me, Stern (a former fifth-grade English teacher) and Wolfe have helped fill a huge gap in the world of YA and middle-grade letters.

The next cool thing to happen on my trip was Manhattan Henge, a twice yearly astronomical event in which sundown lines up with the crosstown streets of Manhattan. It looks like this: 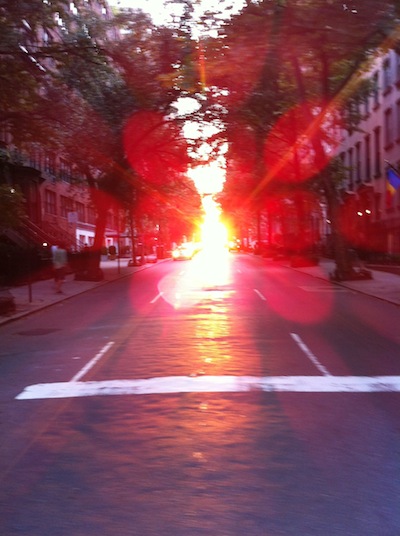 What were the ancient peoples who built Manhattan trying to tell us about May 28 and July 12? We may never know.

The third thing I did was have an amazing dinner with respected private citizen Maureen Johnson and her English offsider, Oscar Gingersnort. This was at 11 Madison, and included crazy-ass dishes like this one: 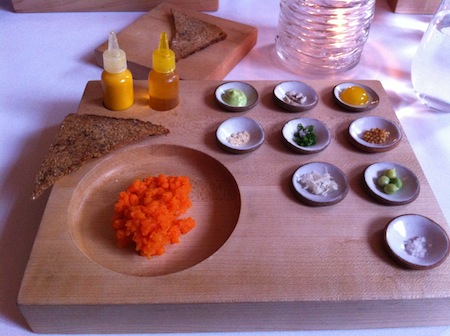 The courses were many and wondrous, and gave us the opportunity to plot the destruction of all other YA authors what to do at Leaky Con next year.

Nextly, I had a meeting with my excellent publishers about how to market my next book, Afterworlds. The ideas were many and wondrous, and will be revealed in due time. I can’t wait to see what you guys think of this book, which has been three years in the writing. (Because it’s really two books in one.)

Afterworlds will come out late next year, probably on October 28. (This date is a clue to the book’s subject matter! Spin on that one, fannish brains!)

One of my other projects for this trip was to start gathering my “papers,” all the editorial, artistic, and business flotsam that I’ve collected over the last two decades. I’ll be donating them to an as-yet-undetermined institute of higher learning as a huge tax dodge boon to future scholars.

The first step was to collect exactly one first printing of each of my foreign editions, a project which, even in its opening stages, ate my living room floor: 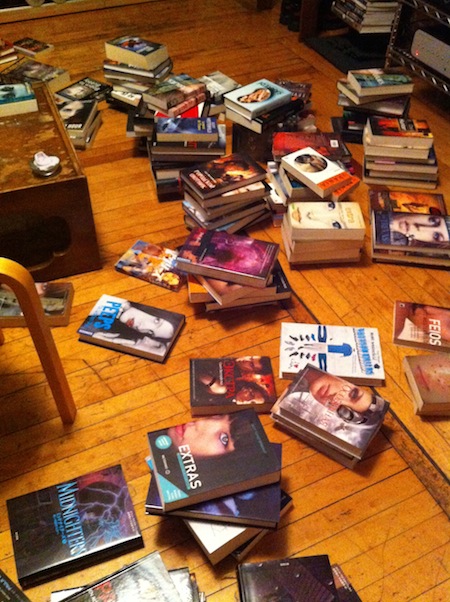 I also found my very first (incomplete) novel, the least embarrassing page of which looks like this: 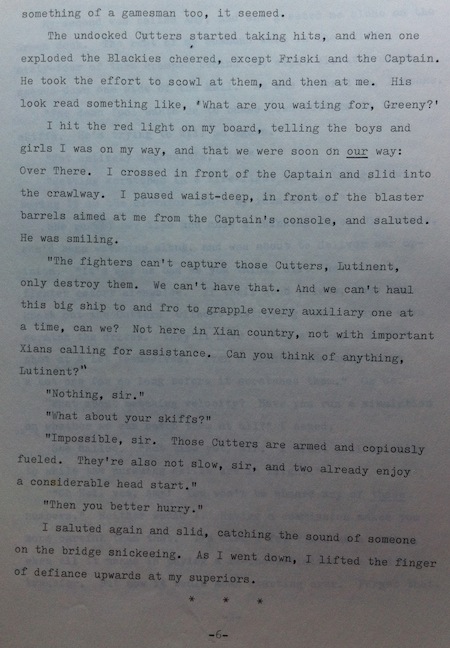 And that’s all you will ever see of that novel, unless you travel to the as-yet-undetermined institute of higher learning personally. (It’ll be in the box with the big padlock encrusted with contact poison.)

I just realized that this piece of juvenilia is called Keeps, only one letter away from a somewhat more recent (and less appalling) novel of mine. I wonder what the ancient peoples who made me become a writer were trying to tell us about the letters “-eeps.”

In mid-July, Justine and I also had the great pleasure of teaching at Alpha, a residential sf, fantasy, and horror writing workshop for teenagers (basically, a week-and-a-half-long genre writing camp). The young writers and the staff there were smart, committed, and tremendously stylish, as you can see here:

We had a great time. The awesomeness of the students makes me think we’ll do more teaching of this kind in the future. Watch this space for details.

Also, there was a waffle tower. I haz proof: 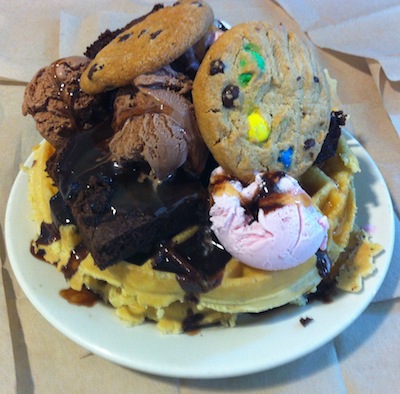 From there, I traveled onward to San Diego Comic Con, the premier geekfest of our time. There I had many and wondrous business meetings, which you will see the fruits of soon right here. Also many costumes were witnessed. The best of which was Sharknado Hat:

I also enjoyed this shirtless steampunk dinosaur hunter (based on a Greg Broadmoor comic, I think): 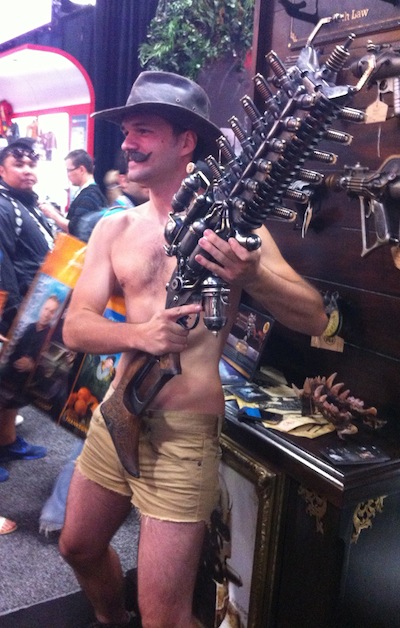 Also witnessed were a cavalcade of capitalism aimed directly at the geek dollar, like these bathrobes: 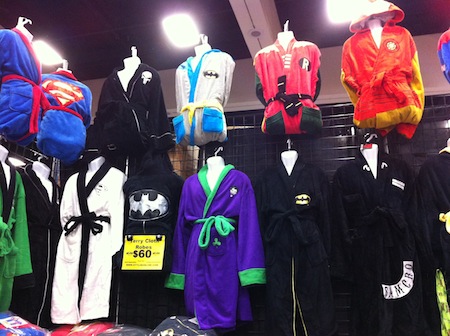 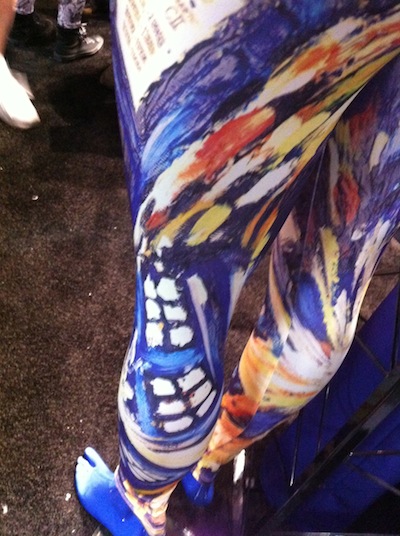 So let me get this straight. These are Dr Who-themed leggings in the style of van Gogh. In the words of Tally Youngblood, isn’t that one thing too many? (Nah. It’s probably one thing too few. And, yes, I know the reference from the show.)

After SDCC, Justine and I spent a week in LA, where various meetings were had. Some of these shall be the subject of my next blog post. But no, there is no fresh movie news of consequence. The usual movie options are afoot, but the feet in question are slow moving. Sorry to disappoint you. The wheel of Hollywood turns slowly, but it grinds exceedingly fine. (Not really. It usually grinds pretty crappily. But it does grind onward in the case of Uglies and Leviathan. We shall see.)

Okay, more about the trip in a week or so. I’ll be blogging here more often, because I’m almost done with Afterworlds. Thanks to all of you who’ve stuck around and enlivened the comments section while I’ve been writing.