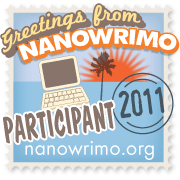 As we approach the month of November, many of you are no doubt getting ready for National Novel Writing Month, aka NaNoWriMo! In this yearly ritual, tens of thousands of bookish folk declare their intent to write a whole novel in a mere thirty days. (Or at least 50,000 words, which is certainly on the way.) Doing NaNoWriMo is a great way to take a stab at finally writing that novel in your head, or to test your own discipline, or simply to understand better what your favorite novelists go through on a daily basis.

Thinking about doing it yourself? Go here for NaNoWriMo’s Young Writers Program, and sign up!

Two years ago, Justine and I did a whole month of writing advice posts in honor of all you brave NaNoWriMoers. We’re too busy to repeat the effort this year, but below is a handy set of links to all our advice of 2009.

The odd-numbered posts are mine, and the evens are Justine’s.

Best of luck to you all!

(Also, I just signed a metric buttload of books at Books of Wonder here in NYC. Click here to mail-order these signed copies. There are some of every series I’ve ever written, so call them if you don’t see the one you want.)

And now here at the tips!

NaNo Tip #4: Word Count is Not Everything

NaNo Tip #5: Write Your Way Out

NaNo Tip #12: Turn the Internet Off

NaNo Tip #14: Procrastination Can Be Your Friend

NaNo Tip #20: Don’t Wait for the Muse to Strike

NaNo Tip #28: Take Care of Yourself