The first of several autumn releases for the Uglies series arrives in stores today . . . 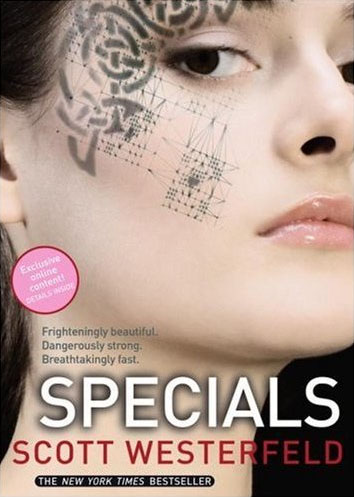 Note the new tagline for those of you who really didn’t like the old boring one!

Also, there’s a pink circle (known as a “burst” in publishing) talking about “Exclusive Content!” That refers to all the fine downloadable content at Behind the Pulse, including an e-book version of the end of Specials, with “director’s notes” by me.

Basically, I went through the last chapter and explained a bunch of stuff, like special features on a DVD. Specials was a particularly interesting book to do, because it almost ended on an entirely different note. (Wise editors intervened.)

Here’s the direct link to check out what I mean.

One other thing about the paperback: it has chapters two and three of Extras in the back. Along with this blog post, the first three chapters are now out in the wild!

Speaking of Extras, Justine was buying a big stack of Hikaru No Go at a Borders near us, and ran across this big ol’ sign:

Me and Jenna Bush. Hmm.

Completing the autumnal roll-outs will be the boxed set of the trilogy, available in the US on October 23.