I’m literally blogging from the lobby right now. The hotel has forced us to check out (we’re flying to Detroit tonight) and we haven’t been picked up for the appearance at Pooh’s Corner in Grand Rapids yet.

So I’m sitting here on a couch next to the gift shop and remembering that the wonderful German publisher of Peeps, Kosmos, have been sponsoring fan-art comics contests lately.

I don’t have all the info about these contests, but down below you can see a few of the wonderful efforts they’ve inspired. They prove that manga and western-style comics are going strong in Germany.

Click any of these images to make them bigger.

This one’s from Sandra Chemnitz. Great use of layout and frames.

.
And here’s one from Rita Folduari, who made her own paper for the comic! There’s a cool mixed-media thing going on, using both pen and watercolors. 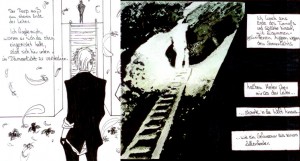 .
And this one from Daria Jurek, which looks somehow very German to me: 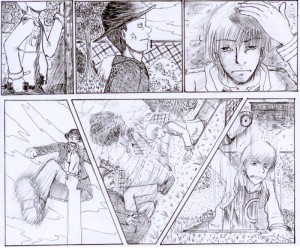 .
All of them very awesome, as are many of the others submitted. Once I figure out where these contests are being held, I’ll let you know. (My German is shaky.) I think more might be coming in.

Oh, and here’s the cover of the Kosmos version. A special non-existent prize for the first commenter to translate the tag line. (It’s from the book, and I figured it out on sight.) 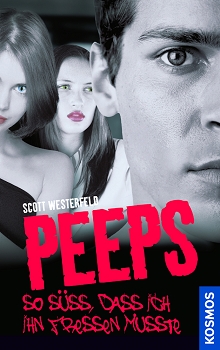 And click here for the scoop about Justine’s appearances.